A STEP TOWARDS STRENGTHENING THE NJCM - AIPCPCCWF CONGRATS COM. KRISHNAN ! 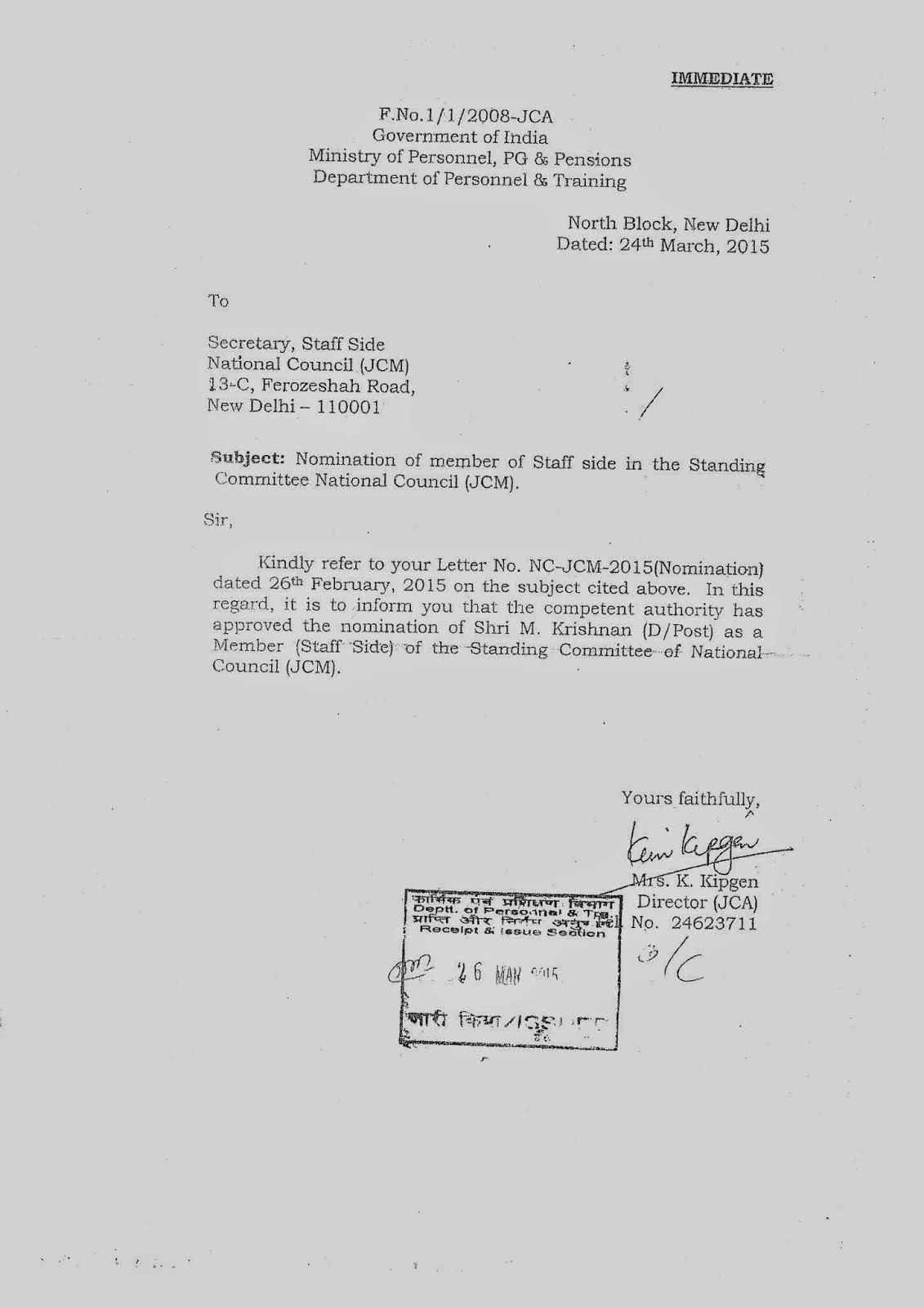 Posted by Y. Nagabhushanam at 04:50 No comments: 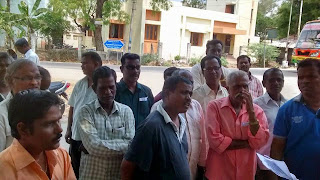 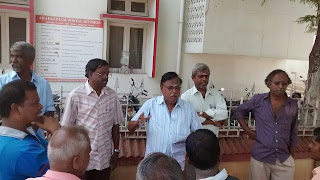 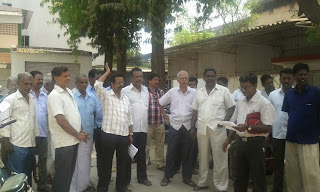 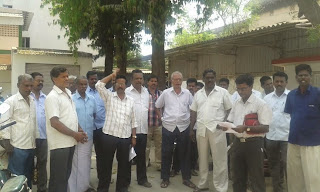 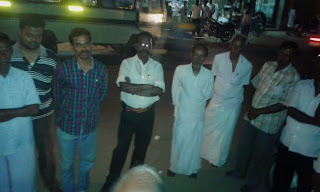 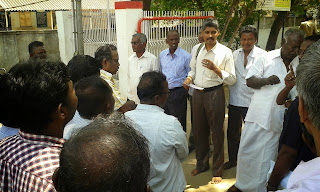 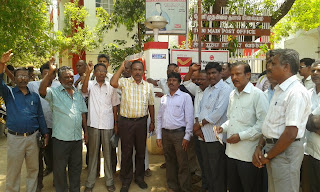 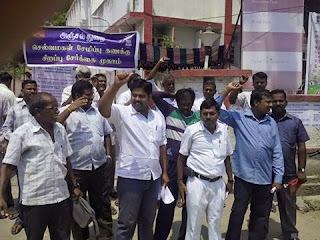 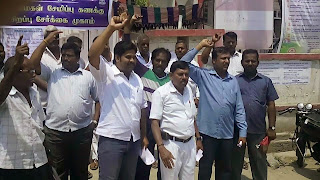 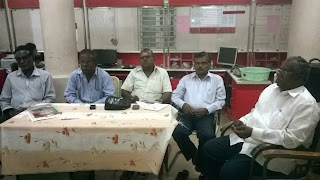 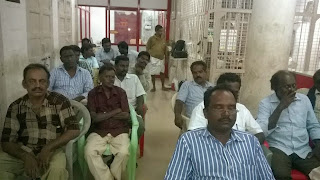 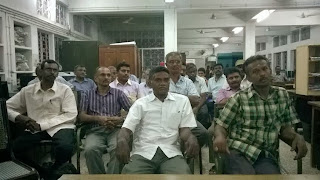 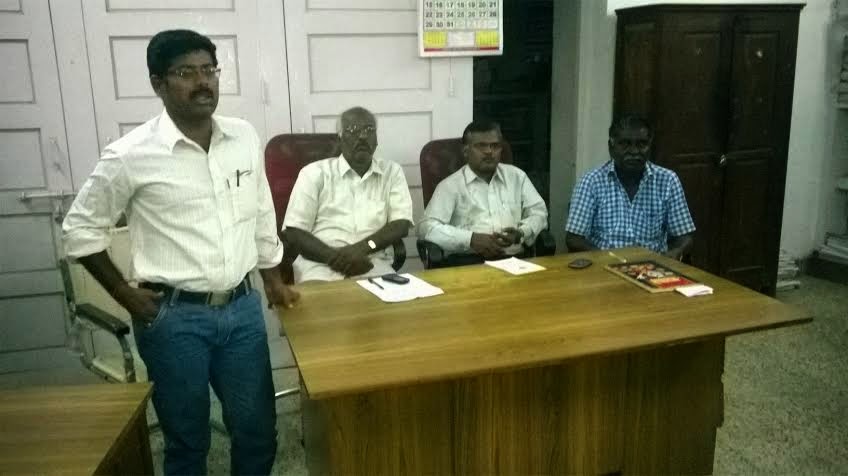 GUIDELINES OF DEPARTMENT OF PERSONNEL & TRAINING ( DOPT) REGARDING REPRESENTATION OF SC, ST, OBC (Click the link below for details) http://indiapost.gov.in/DOP/Pdf/Circulars/Rep__Sec_Board_1998_Pub_Upload.PDF

Posted by Y. Nagabhushanam at 11:36 No comments:

After detailed discussion Federal Secretariat endorsed the decisions of PJCA.
Decision was taken to mobilize the entirety of employees to participate in Parliament March on 28th  April, 2015 in maximum number ,  for success of Indefinite  Strike  from 6th May 2015 and to  become Member of NFPE Unions. In this regard all effective steps should be taken. All General Secretaries should issue circulars and send upto Branch level.

All All India leaders of NFPE union should take part in PJCA Dharna to be held on 28.04.2015 in front of Dak Bhawan, New Delhi for settlement of pending demands of PJCA Strike Charter.

To
All Office Bearers of both the Federations.
All General Secretaries
All Circle/Divisional and Branch Secretaries.

The meeting attended by both Secretary Generals and General Secretaries of both the Federations.

In the meeting Com. R.N. Parashar, Secretary PJCA and Secretary General NFPE presented the position of action and development on the 40 points Strike Charter of demands after PJCA meeting with Secretary (P) on 05.02.2015.

All General Secretaries presented their views and after a detailed discussion, the following decisions were taken:

3,         Notice for Indefinite Strike to be organized from 06th May 2015 will be served to the Secretary, Department of Posts, New Delhi on 06th April-2015. All Circle /Divisional and Branch Secretaries will also submit Strike Notice at all levels by organizing demonstrations in front of all important offices.

4          Campaign programme by All India Leaders of both the Federations affiliated unions has been finalized and it will be completed between 05th April to 15th April, 2015 to mobilize entire rank and file. All concerned  will fix the dates in consultation with Circle  leadership and conduct the programme to mobilize  maximum employees to participate in Parliament March to be conducted on 28th April 2015 under banner of National Council  JCM and to make them ready for the Indefinite  strike  from 06th May 2015 onwards . (Campaign programme is enclosed)

2.         Meeting of FNPO leaders was also held with 7th CPC on 26th March 2015 at CPC office at New Delhi. Secretary General & all General Secretaries presented the issues effectively and Pay Commission was also of positive views on most of the items. FNPO & NUGDS also discussed GDS related issues to Pay Commission and submitted  memorandum.

ALL THE CASUAL,PART TIME  CONTINGENT & CONTRACT WORKERS ARE

REQUESTED TO PARTICIPATE IN ALL THE PROGRAMMES OF POSTAL JCA IN

LARGE NUMBER AND MAKE THE PROGRAMME A GRAND SUCESS.
Posted by Y. Nagabhushanam at 10:59 No comments: