We send herewith copy of the letter from the Secretary, Staff Side, JCM intimating of the decision taken by the Staff Side to hold a National Convention at New Delhi on 11thDecember, 2014.  We have already placed the said letter in our website.  The decision is the outcome of the efforts the Confederation representatives in the Staff Side of the National council and must be considered a step in the right direction in pursuance of the Charter of demands, especially the important issues like wage revision, interim relief, merger of DA, scrapping of the new Pension scheme, privatization, outsourcing etc.  As indicated in the letter of the Staff side Secretary, the staff side is likely to meet in the second fortnight of November, 2014 to finalize the draft declaration and the programme of action.  We shall place the draft declaration on our website as and when the same is finalized.

The timings have been so arranged to enable the comrades to reach in the morning of 11th and if necessary to return on the same day.  The delegates  are requested to make their own arrangements for stay etc,if they wish to be at Delhi earlier or later of the day of the convention.  The venue is well connected by Metro Line and from the Civil Lines Station, it is walkable distance only. Kindly ensure that the tickets for onward and return journey for the participating delegates are booked well in advance.

With greetings,
Yours fraternally,

Quota for affiliates for National convention of JCM (Staff Side)

Ban on creation of Plan and Non-Plan posts - Finance Ministry

OFFICE MEMORANDUM
Subject: Regularization of Casual Labour with Temporary Status(CL-TS)-Proposals fromMinistries/Departments on -regarding.
The undersigned is directed to say that Casual Labourers (Grant of Temporary Status & Regularisation), Scheme of Government of India, 1993, circulated vide DOPT OM No. 51016/2/90-Estt(C) dated 10.09.1993, stipulated conditions for grant of temporary status and regularization of services to the persons recruited on daily wage basis in the Central Government Offices as on 10.09.1993. It was held in the Mohan Pal Case SLP (Civil) No. 2224/2000 that the Scheme of 1-9-93 is not an ongoing Scheme and the temporary status can be conferred on the casual labourers under that Scheme only if they were inemployment on the date of the commencement of the scheme and they should have rendered continuous service of at least one year i.e. at least 240 days in a year or 206 days (in case of offices having 5 days a week). The Scheme inter-alia provided for regularization of CL-TS against Group `D’ posts.
2. Following the acceptance of the recommendation of the 6th CPC, all Group D posts have been upgraded to Group C posts. Recruitment to erstwhile Group `D’ posts placed in Group ‘C’, PB-1, Grade Pay ‘1800/- (non technical as MT Staff) is now made only through Staff Selection Commission and minimum educational qualification for appointment is Matriculation or ITI pass. Regularisation of CL-TS therefore cannot be done by theMinistries/ Departments on their own and requires relaxation of para-8 of the Appendix to the O.M. dated 10.09.1993.
3. This Department vide O.M No. 49011/31/2008-Estt(C) dated 17th February,2009 had requested all Ministries/ Department to provide information relating to CL-TS on their rolls. Information relating to 231 CL-TS was received from 29 Ministries/Departments which were processed. Since then this Department has been receiving proposals piece-meal from different
4. Department of Expenditure have now advised this Department that in order to avoid piece- meal examination of such proposals, a consolidated proposal for regularization of all such remaining CL-TS who were on the rolls of the Ministries/Departments on 10.09.1993 and yet could not be regularized may be forwarded to them for further consideration/examination. Therefore, all Ministries/Departments are requested to review the position at their establishments and send a consolidated proposals for regularization of services of such remaining CL-TS on their rolls (including attached/subordinate and autonomous bodies), if any, latest by 30.11.2014 to this Department in the enclosed format. It may be ensured that complete information in respect of the Ministry/Department and its Attached/Subordinate Offices is sent. The information may also be sent by e-mail(in MS Word) at dse@nic.in.

The Commission, headed by its Chairman, Justice Shri A. K. Mathur, proposes to visit Shimla, Himachal Pradesh from 12th to 13th November, 2014. The Commission would like to invite various entities/associations/federations representing any/all categories of employees covered by the terms of reference of the Commission to present their views.

Your request for a meeting with the Commission may be sent through e-mail to the Secretary, 7th Central Pay Commission at secy-7cpc@nic.in. The memorandum already submitted by the requesting entity may also be sent as an attachment with this e-mail.

REPLY OF DIRECTORATE ON POSTAL JCA CHARTER OF DEMANDS

Subject: Programme of agitation from 28/08/2014 by Postal Joint Council of Action (PJCA) comprising Unions/Associations affiliated to NFPE and FNPO- Charter of Demands-Regarding.

Sir,
With reference to your letter No. PF/PJCA/2014 dated 01/08/2014 on the above subject, it is intimated that your Charter of Demands has been examined by the respective Divisions within the framework of extant rules. Response of the Department is enclosed.
In view of above, you are advised to call off the proposed agitation.

This issues with the approval of competent authority.

Yours faithfully,
Encl. As stated above
-sd/-
(Arun Malik)
Director (SR & Legal)
CLICK HERE to view the Dte Reply
Posted by Y. Nagabhushanam at 11:13 No comments:

Posted by Y. Nagabhushanam at 11:13 No comments: 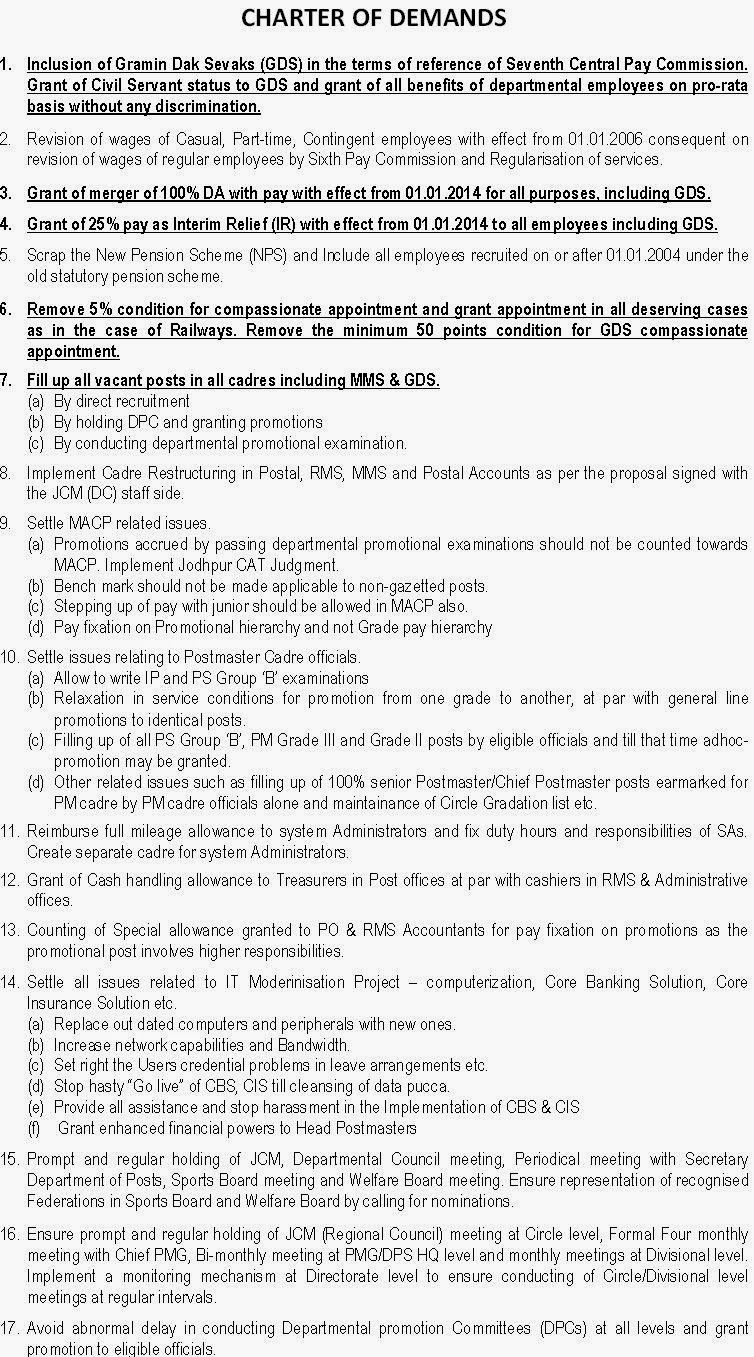 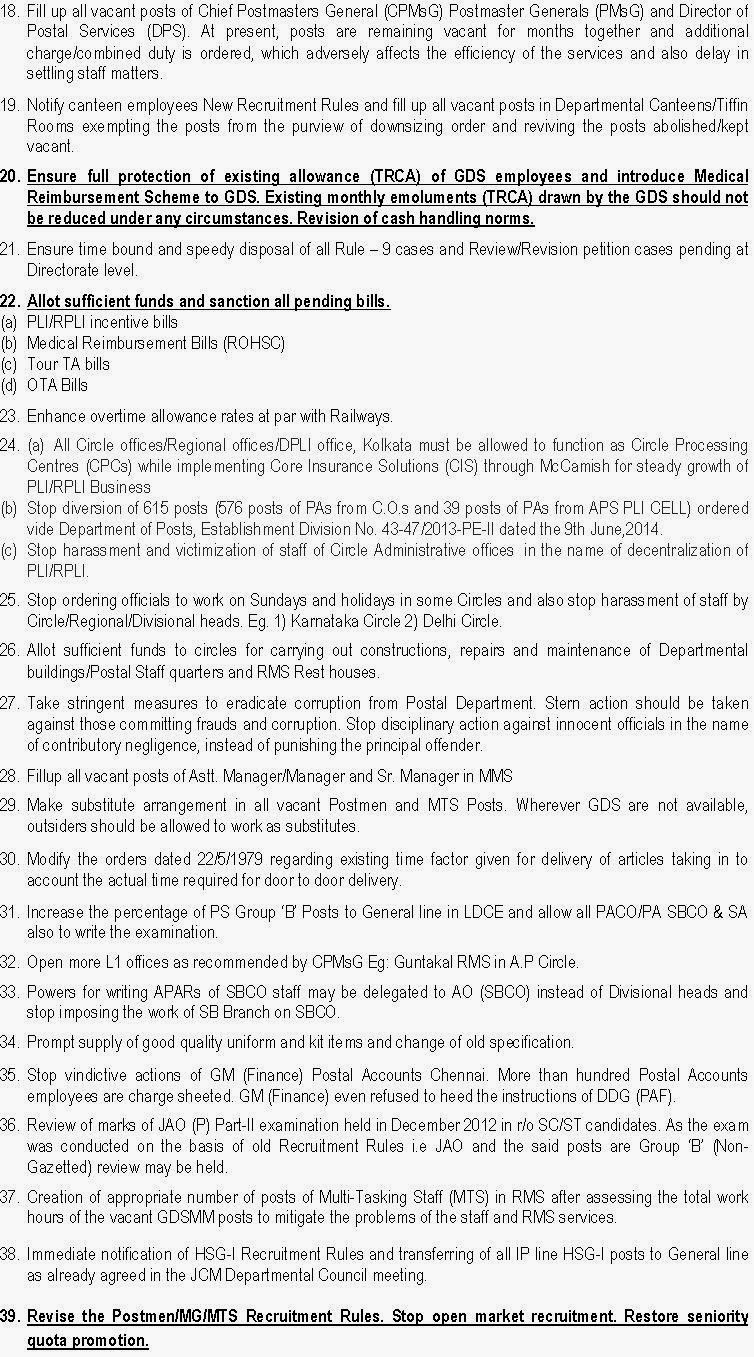 Posted by Y. Nagabhushanam at 10:41 No comments: