We extend sincere thanks to SECRETARY, DEPT OF POST for replying to our memorandum in detail item by item. We are here with submitting our views and actual position prevailing in the Department on each item for your immediate action and implementation of the orders throughout the country uniformly without any deviation.

1. REGULARISATION OF SERVICES AS REGULAR EMPLOYEES OF DEPARTMENT AND GRANT OF ALL BENIFITS INCLUDING PENSION.

ACTUAL POSITION:- Even though there are orders as mentioned vide letter no. 45-95/87-SPB-1 DT. 12-4-91,  THESE ARE NOT BEING IMPLIMENTED IN TRUE SPRIT BY RAISING UNNESCESARY QURIES IN ALL MOST ALL CIRCLES RESULTING IN NON REGULARISATION OF CASUAL WORKERS WORKING SINCE LONG TIME.

AS SUCH SECRETARY IS REQUESTED TO ISSUE INSTRUCTIONS TO STRICTLY IMPLIMENT THE ORDERS BY REFIXING THE CUTOFF DATE ONCE AGAIN.

INSPITE OF CLEAR INSTRUCTIONS FROM DIRECTORATE WITH CLARIFICATIONS, THE SAME ARE NOT BEING IMPLIMENTED IN THE FOLLOWING CIRCLES.
A] TAMILNADU CIRCLE B] SOME DIVISIONS IN NAGPUR REGION OF MAHARASTRA CIRCLE C] KOLKATA METRO REGION.

REGARDING ARREARS PAYMENT IN MANY CIRCLES ARREARS WAS NOT PAID FULLY. ONLY PARTLY PAID ON THE PLEA THAT SUFFICIENT FUNDS ARE NOT AVILABLE.

AS SUCH WE REQUEST THE SECRETARY TO ISSUE INSTRUCTIONS FOR IMMEDIATE PAYMENT OF FULL ARREARS WITHOUT LINKING TO BUDGET PROVISION.

AS SUCH REQUESTED TO ISSUE INSTRUCTIONS SPECIFICALLY FOR IMPLIMENTATION UNIFORMLY THROUGH OUT THE COUNTRY.

4. PREFERENCE TO CASUAL LABOUR IN SELECTION AND APPOINTMENT TO THE VACANT POSTS OF GDS OF THE DEPARTMENT.

IT WAS INFORMED THAT SPECIFIC ORDERS WERE ISSUED TIME AND AGAIN TO IMPLIMENT THE APPOINTMENT AGANIST GDS VACANCIES. BUT UNFORTUNATELY THE SAME ORDERS WERE NOT EVEN FORWARDED BY CIRCLES TO LOWER LEVEL AND INSPITE OF SPECIFIC INSTRUCTIONS NOT IMPLIMENTED THE ORDERS ISSUED ON 16-1-17 AND STRAIGHT AWAY ONLINE NOTIFICATIONS WERE ISSUED FROM ALL CIRCLES.

AS SUCH WE REQUEST THE SECRETARY TO ISSUE SPECIFIC INSTRUCTIONS TO COMPLETE THE PROCESS ISSUED WITH CUTOFF DATE AS 16-1-2017 BEFORE FINALISING ONLINE RECRUITMENT.

REGARDING MINIMUM QUALIFICATION EVEN THOUGH WE ACCEPT THE VIEWS OF CHOUHAN COMMITTEE FOR BPM POSTS, BUT OTHER POSTS THIS NEED NOT BE APPLIED AS THEY ARE NOT LINKED TO TECHNOLOGY.

AS SUCH WE REQUEST THE SECRETARY TO CONSIDER OUR REQUEST FOR RELAXING THE EDUCATION QUALIFICATION IN R/O OTHER POSTS OF GDS EXCEPT BPM POSTS.

5.GRANT OF PAID WEEKLY OFF AND HOLIDAYS.

BUT UNFORTUNATELY THE SAME IS NOT BEING IMPLIMENTED IN ALL MOST ALL CIRCLES AND EVEN THESE ORDERS ARE NOT CIRCULATED TO LOWER LEVEL  AND IN SOME CIRCLES IT WAS MISINTERPRETED AS WHO WORKED CONTINUOUSLY FOR   SIX DAYS ONLY ARE ELIGIBLE, BUT NOT OFFICES HAVING SIX DAYS WORKING AND FINALLY THEY ARE BEING DENIED PAID WEEKLY OFF.

AS SUCH SECRETARY IS REQUESTED TO ISSUE SPECIFIC INSTRUCTIONS TO IMPLIMET THE ORDERS IN TRUE SPIRIT WITHOUT ANY MISINTERPRETATIONS.

WE WOULD LIKE TO BRING TO THE NOTICE OF THE SECRETARY THAT THE COMMITTEE APPOINTED WITH SRI. MANOJIT KUMAR,THE THEN ASSAM CPMG AS CHAIRMAN RECOMMENDED TO CONVERT ALL PTP POSTS AS GDS  AND THE WORKERS ENGAGED AGANIST THOSE POSTS MAY BE CONVERTED AS GDS AS ONE TIME MEASURE. IF THAT IS IMPLIMENTED THE PROBLEM WILL BE SOLVED PERMANENTLY.

AS SUCH WE REQUEST THE SECRETARY TO CONSIDER THE SAME AND DECESION MAY BE TAKEN TO CONVERT ALL PTP POSTS AS GDS AND THE PRESENT OFFICIALS WORKING AGANIST THOSE POSTS MAY BE CONVERTED AS GDS.

EVEN THOUGH THE RECRUITMENT RULES WERE AMENDED AS MENTIONED BY THE DEPARTMENT,THE SAME IS NOT BEING IMPLIMENTED STRICTLY IN ALMOST ALL CIRCLES. AS SUCH STRICT INSTRUCTIONS MAY BE ISSUED TO IMPLIMENT THE OERDERS IN TRUE SPRIT WITHOUT ANY AMBIGUITY.
SECRETARY IS REQUESTED TO TAKE DECESION TO ABSORB ALL AS ONE TIME MEASURE BY FIXING A CUT OFF DATE.

IT WAS ACCEPTED THAT CASUAL LABOURERS ARE BEING ENGAGED INSPITE OF ORDERS FROM DIRECTORATE WHICH IS NOT PERMISSIBLE,AS SUCH ISSUING OF APPOINTMENT ORDER DOES NOT ARISE.

IT IS A FACT THAT THEY ARE BEING ENGAGED CONTINUOUSLY WHICH WAS ACCEPTED BY DIRECTORATE. BUT THE POOR WORKERS ARE NOT RESPONSIBLE FOR THIS.

AS SUCH THIS MAY BE RELAXED AS ONE TIME MEASURE AND BY FIXING CUTOFF DATE APPOINTMENT ORDERS MAY BE ISSUED TO ALL THOSE WHO ARE ENGAGED  UPTO THAT DATE.

In conclusion, as per the reply given by the DEPARTMENT, it is very clear that the orders issued by the Directorate are not being taken seriously by the lower level authorities and even they are not even circulated to lower level in many occasions. We feel that this is the most lethargic attitude of lower level authorities and implementing according to their whims and fancies, even without caring Directorate orders. This is resulting in ignorance of lowest paid workers in the Department and they are the worst affected workers, who are attending to their duties perfectly with utmost dedication than any other cadre in the Department and even the primary slogan of the present Government is " swatch bharat" which is being implemented by other than these workers.
As such we request the SECRETARY to look into the issues and settle their problems permanently, so that they will feel happy and never forget the action of the SECRETARY.

We hope that early positive action will be taken by the SECRETARY personally.

A line in reply will be appreciated.

Posted by Y. Nagabhushanam at 10:17 No comments:

As you are aware the indefinite strike of GDS Unions (AIPEU-GDS, AIGDSU, NUGDS & BEDEU) entered the 8th day today. All India strike percentage is 96%. Five rounds of discussions held with Secretary, Department of Posts, Additional Director General, Posts and conciliation meetings of Regional Labour Commissioner failed due to the adamant and negative attitude of the Government and Department. As per the call of NFPE and all affiliates of NFPE, departmental employees in Postal department organised black badge campaign and protest demonstration as solidarity support to the GDS strike. In five states (Kerala, Tamilnadu, Andhra Pradesh, Telangana and West Bengal) departmental employees also organised solidarity strike eventhough in four states (Tamilnadu, Andhra Pradesh, Telangana and West Bengal) they have withdrawn the solidarity strike on the fourth day due to compelling reason. In Kerala departmental employees of NFPE and FNPO are continuing their strike. In all states including those states where the departmental employees have withdrawn the solidarity strike, 100% GDS employees are continuing their strike.

Confederation of Central Government employees & Workers has already given call for daily demonstration in front of Postal and RMS offices and also extend full support and solidarity to the strike.
As the strike is continuing Confederation National Secretariat and NFPE Federal Secretariat has decided to organize mass hunger fast in front of major Post office/RMS offices on 31st May 2018 Thursday from 10 AM to 5 PM. It is also decided to mobilise maximum number of employees from Delhi and nearby states in the Sanchar Bhawan March already announced by the striking GDS Unions on 1st June 2018 Friday at 10:30 AM.

All affiliates and State/District Level Coordinating Committees of Confederation and NFPE are requested to organize the above mentioned programmes in an effective manner with biggest participation of employees.

Email ThisBlogThis!Share to TwitterShare to FacebookShare to Pinterest
Revision of Minimum Pay and Fitment formula due to increased revenue collections of the Central Government

Today none of the 7th CPC related demands of Central Government Employees are settled. The assurance given by the Group of Ministers to the NJCA leaders regarding increase in Minimum Pay and Fitment formula is in paper even after a lapse of 20 months. Now the Finance Minister has replied in Parliament that “no change in Minimum Pay and Fitment formula is at present under consideration”.

To avert the 11th July CG employees strike the Hon’ble Prime Minster had instructed the group of Hon’ble Ministers including Shri Rajnath Singhji, Hon’ble Home Minister, Shri Suresh Prabhuji , Hon’ble Railway Minister    and Shri Arun  Jaitelyji , Hon’ble  Finance Minister to hold discussions with the Staff Side (JCM) on 30th June 2016 and the Shri Arun  Jaitelyji , Hon’ble  Finance Minister had published a written assurances in the Government  website on 6th July 2016 leading to deferment  of the strike .

Pay Commission Objective: It is the endeavour of every pay commission to ensure that the pay and allowances of employees should be ‘fair and reasonable’. The pay structure should also motivate the employees to reasonable levels of performance in the tasks assigned to them, so that the general public derive the benefit of their service as intended.

Our demand of revision of Minimum Pay and Fitment formula is quite justified.

Comparative picture of pay of Central Government and State Government in regards to minimum wage as on  1.7.2017

The financial position of the Central Government is very good. Even the GDP (Gross Domestic Product) has shown increase in last few years which is around 7% ,  the Indian economy is fastest growing and placed 7th in the world  ( which is at 2,250.987  billions of $ ), comparing to wages paid in  the world our wages are at lower  level. The Government fiscal budget deficit equal to 3.50 percent of the country's Gross Domestic Product in 2016. Compared to 2008 where the fiscal deficit was at 7.8 %, but today the fiscal deficit is contained at 3.5%. This is also a healthy sign of the economic status of the Central Government financial status, the budget fiscal deficit is always below 4%.

Net collection from corporate tax went up 17.1 per cent while that from personal income tax rose 18.9 %.

With the improved economic climate, introduction of e-way bill and improved GST compliance, GST collections would continue to show a positive trend.

The wage bill of the Central Government on in its employees is less than 10% or 3.4% of the GDP, which is less compared to various countries world wide . 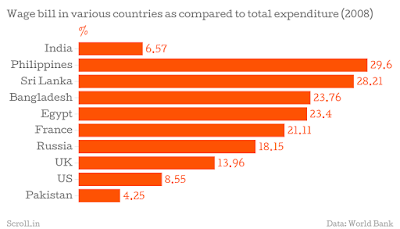