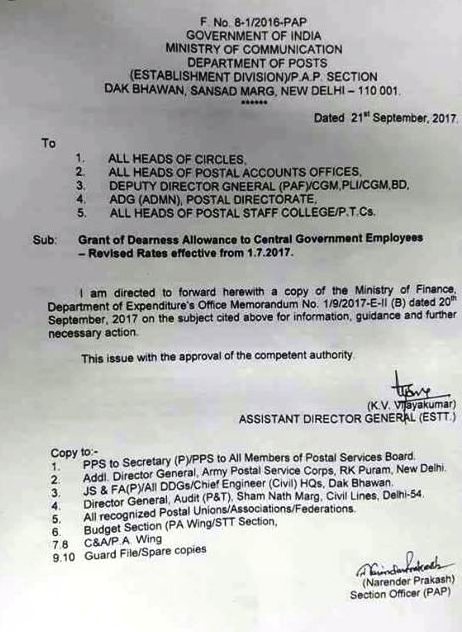 Posted by Y. Nagabhushanam at 17:29 No comments:

Government decided to close down 12 out of 17 Government of India Presses.

Confederation National Secretariat calls upon all C-O-Cs and Affiliates to conduct protest  demonstrations at all Centers and Dharnas in front of all Government of India Presses and  send resolutions to Prime Minister. 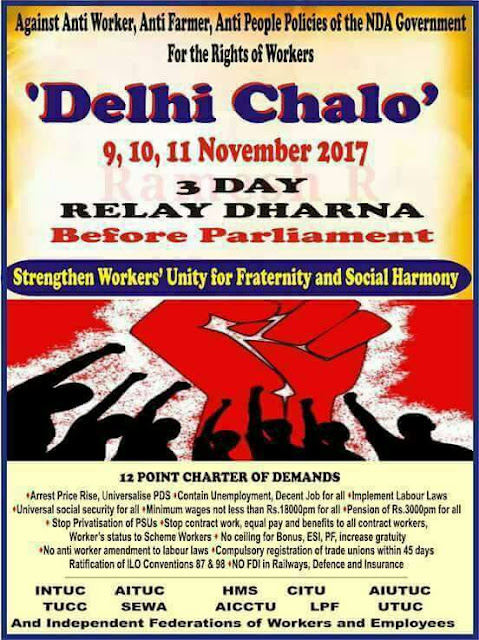 Posted by Y. Nagabhushanam at 11:23 No comments:

NOTIFICATION FROM MINISTRY OF LABOUR AND EMPLOYMENT ON CONTRACT LABOUR (REGULATION AND ABOLITION) CENTRAL RULES, 1971 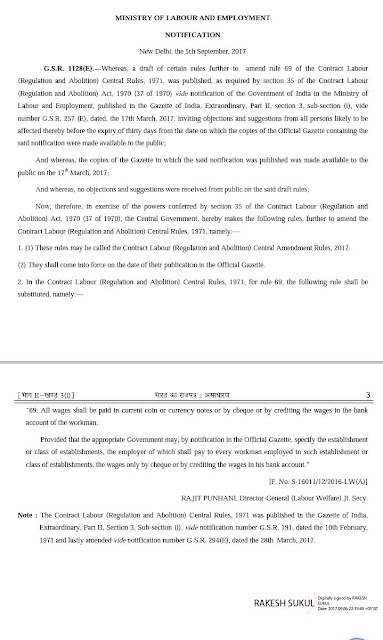 Posted by Y. Nagabhushanam at 11:20 No comments:

Secretary General, Confederation of Central Govt. Employees & Workers
2018 September 19th (Next year) is the 50th Anniversary of 1968 September 19th one day strike.  All leaders and workers who led and participated in that historic strike have either retired from service or are no more.
The indefinite strike of Central Govt. Employees in1960 was the first major strike of Central Govt. Employees after independence.  The five days strike from 1960 July 11 midnight was brutally suppressed by the Central Government declaring it as “Civil Rebellion”.  The main demand of the strike was improvement and modifications in the 2nd CPC recommendations.  The Need Based Minimum Wage, though adopted by the 15th Indian Labour Conference in 1957, was rejected by the 2nd CPC.
The Joint Consultative Machinery (JCM) was constituted in 1966 by then Home Minister Gulsarilal Nanda, as per the decision of the Government.  The apprehension of the progressive leadership that this negotiating machinery may not settle any major demands of the Central Govt. employees and may become just a talking shop or a time killing business, ultimately resulting in abnormally delaying the genuine demands, came true within a year of its formation.  In the very first meeting of the National Council JCM, the following three demands were notified by the staff side.
1.      Grant of Need Based Minimum Wage as approved by the 1957 Tripartite Labour Conference.
2.      Merger of DA with Pay
3.      Revision of DA formula
After prolonged discussion for about one and a half year, disagreement was recorded.  As per JCM Scheme once disagreement is recorded, the item should be referred to compulsory arbitration.  But Govt. rejected the demand for arbitration. Protesting against this arbitrary stand of the Govt. the staff side leadership walked out of the JCM and decided to go for one day’s strike.  A Joint Action Committee was formed and the date of the strike was decided as 19th September 1968.  Eventhough, the INTUC affiliated organisations were initially a part of the strike decision, later on they decided not to join the strike due to the intervention of the then Congress Government headed by Smt. Indira Gandhi.
The following were the main demands of the strike charter of demands.
1.      Need Based Minimum Wage.
2.      Full neutralisation of rise in prices.
3.      Merger of DA with Basic Pay
4.      Withdrawl of proposal to retire employees with 50 years of age or on completion of 25 years of service.
5.      Vacate victimisation and reinstate victimised workers.
6.      No retrenchment without equivalent alternative jobs.
7.      Abolition of Contract and Casual Labour System.
Strike notice was served and the Joint Action Council (JAC) decided to commence the strike at 0600 AM on 19th Septembe r 1968.  Intensive campaign was conducted throughout the country.  AIRF, AIDEF and Confederation was the major organisations in the JAC.  Govt. invoked Essential Services Maintenance Ordinance (ESMO) to deal with the strike.  Govt. also issued detailed instructions to impose heavy penalty including suspension, dismissal, termination, Break-in-service etc. on the striking employees. Para-military force (CRPF) and Police were deployed to deal with the strike.  Central Govt. gave orders to all state Governments to suppress the strike at any cost.  It was a war-like situation.  Arrest of Leaders started on 18th September itself.  About 3000 employees and leaders were arrested from Delhi alone.  All over India about 12000 Central Government employees and leaders were arrested and jailed.
Inspite of all these brutal repressive measures the strike commenced on 18th after noon itself at many places and was a thundering success all over India and in all departments including Railway, Defence, P&T etc.  About 64000 employees were served with termination notices, thousands removed from service and about 40000 employees suspended.  Seventeen (17) striking employees had been brutally killed at Pathankot, Bikaner, Delhi Indraprastha Bhavan  and at Upper Assam in lathi charge, firing by police and military and by running the train over the bodies of employees who picketed the trains.
Though the strike was only for one day on 19th September 1968, the victimisation and repression continued for days together.  Struggle against victimisation also continued including work-to-rule agitation, hunger fast of leaders from 10th October 1968.  There was unprecedented support to the strike and relief work and also to agitation for reinstatement of the victimised workers, from National Trade Unions, state employees and teachers Unions/Federations etc.  A mass rally was organised before the  residence of Prime Minister of India Smt. Indira Gandhi on 17th October, 1968.
Kerala was ruled by the Communist Govt. during the strike.  Chief Minister Com. E. M. S. Namboodiripad declared Kerala Govt’s full support to the strike of Central Government employees.  The Central Govt. threatened dismissal of the Kerala Govt. for defying the Centre’s directive to suppress the strike.
1968 September 19th strike is written in red letters in the history of Indian Working Class.  The demand raised by the Central Govt. employees - Need Based Minimum Wage - was the demand of entire working people of India.  Even today, the Central Govt. employees and other section of the working class are on struggle path for realisation of the Need Based Minimum Wage.  The demand of the Central Govt. employees to modify the recommendations of the 7th Central Pay Commission to ensure Need Based Minimum Wage is not yet conceded by the BJP-led NDA Government.  Even the assurance given by three Cabinet Ministers including Home Minister, Finance Minister and Railway Minister regarding increase in Minimum Pay and Fitment formula is not honoured by the Govt. even after a lapse of one year and  entire Central Government employees feel cheated.
It is in this background, we are entering into the 50th year of 1968 September 19th strike. Let us pledge that we shall continue our struggle for realisation of the demands raised by the matryrs of the 1968 strike.  Let us pay respectful homage to those valiant fighters who sacrified their life for the working class of India.  Let us salute and honour all those who participated in the historic strike, especially those who had been victimised severaly for joining the strike.  Let us organise various programmes throughout the country at all levels, to commemorate the inspiring memory of 1968 September 19th strike. 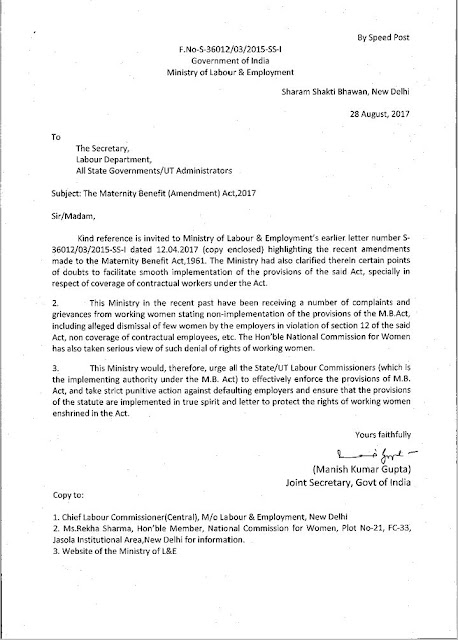 CABINET APPROVES INTRODUCTION OF THE PAYMENT OF GRATUITY (AMENDMENT) BILL, 2017
IN THE PARLIAMENT

The Union Cabinet chaired by the Prime Minister Shri Narendra Modi has given its approval for introduction of the Payment of Gratuity (Amendment) Bill, 2017 in the Parliament.

The Amendment will increase the maximum limit of gratuity of employees, in the private sector and in Public Sector Undertakings/ Autonomous Organizations under Government who are not covered under CCS (Pension) Rules, at par with Central Government employees.

The Payment of Gratuity Act, 1972 applies to establishments employing 10 or more persons. The main purpose for enacting this Act is to provide social security to workmen after retirement, whether retirement is a result of the rules of superannuation, or physical disablement or impairment of vital part of the body. Therefore, the Payment of Gratuity Act, 1972 is an important social security legislation to wage earning population in industries, factories and establishments.

The present upper ceiling on gratuity amount under the Act is Rs. 10 Lakh. The provisions for Central Government employees under Central Civil Services (Pension) Rules, 1972 with regard to gratuity are also similar. Before implementation of 7th Central Pay Commission, the ceiling under CCS (Pension) Rules, 1972 was Rs. 10 Lakh. However, with implementation of 7th Central Pay Commission, in case of Government servants, the ceiling now is Rs. 20 Lakhs effective from 1.1.2016.

Therefore, considering the inflation and wage increase even in case of employees engaged in private sector, the Government is of the view that the entitlement of gratuity should be revised for employees who are covered under the Payment of Gratuity Act, 1972. Accordingly, the Government initiated the process for amendment to Payment of Gratuity Act, 1972.
*****
AKT/VBA/SH
(Release ID :170696)

CABINET HIKES DA TO CG EMPLOYEES
AND PENSIONERS BY 1%

IMPLEMENTATION OF GOVERNMENTS DECISION ON THE RECOMMENDATION OF THE SEVENTH CENTRAL PAY COMMISSION-REVISION OF PENSION OF PRE-2016 PENSIONERS/FAMILY PENSIONERS ETC. - REG.