Discontinuation of Ad-hoc promotion of officials / officers of the Department of Posts, consequent upon refusal to accept regular promotion to Postal Services Group 'B' cadre and Junior Time Scale of Indian Postal Service Group 'A' (Click the link below for details)
http://www.indiapost.gov.in/DOP/Pdf/Postings/Ad_Hoc_Promotion_1644_15112014_Pub_Upload.PDF

Intimation by a Government Servant to the prescribed authority about acquiring or disposing of any immovable / movable property either in his/her own name or in the name of any member of his/her family and submission of declarations - reg. (Click the link below for details) 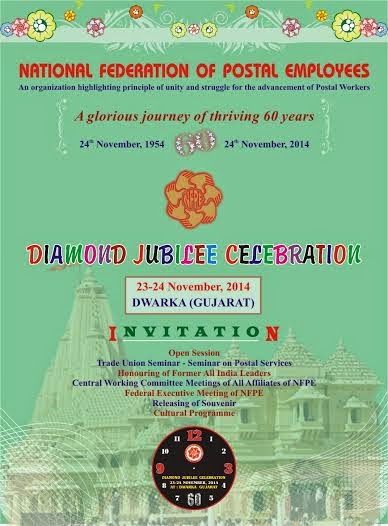 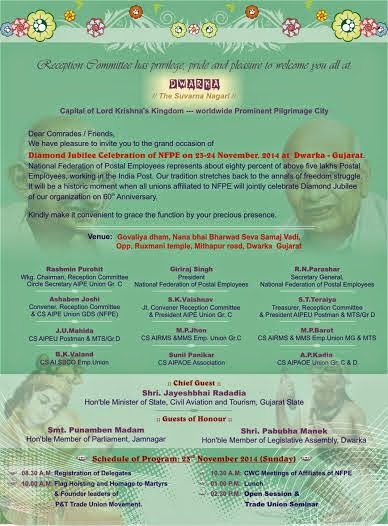 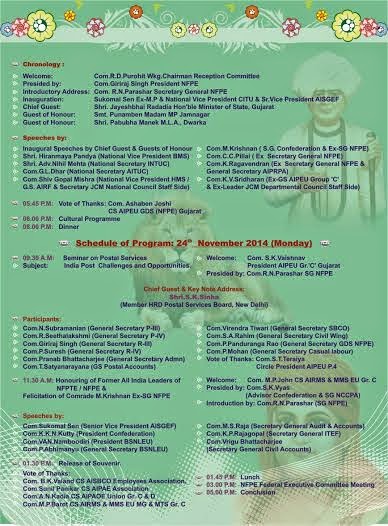 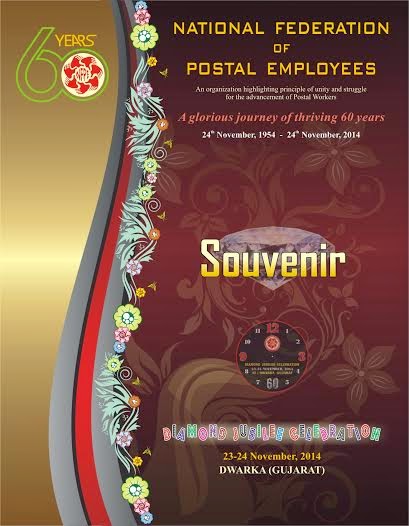 POSTING OF GOVERNMENT EMPLOYEES WHO HAVE DIFFERENTLY ABLED DEPENDENTS – REG (Click the link below for details)
http://ccis.nic.in/WriteReadData/CircularPortal/D2/D02adm/42011_3_2014-Estt.Res-17112014.pdf

JCM, National Council, Staff Side organizations will be organizing a National Convention of all Central Government  Employees at New Delhi on 11.12.2014. Railway, Defence & Confederation will participate in the convention. Convention will declare future course of action. DA merger, Interim Relief, Date of effect of 7th CPC inclusion of GDS under 7th CPC etc are the main demands.

Posted by Y. Nagabhushanam at 10:28 No comments:

WHY WE ARE DEMANDING INCLUSION OF GDS IN 7thCPC……...?

WHY WE ARE OPPOSING SEPARATE COMMITTEE FOR GDS……….?

‘Recognized’ GDS Union has signed a ‘respectful’ agreement with the Govt. accepting separate Committee for GDS. NFPE, FNPO, AIPEU GDS(NFPE), NUGDS, Confederation of Central Govt Employees, JCM National Council (staff-side) all are demanding inclusion of Gramin Dak Sevaks’ issues under the 7th CPC. Now Govt is moving ahead to appoint a separate Committee for GDS with the consent of recognized GDS Union.

.......... in its Report Chapter-IX para-1.1 “It is therefore recommended that when ever it required to review the service conditions and wage structure of the employees of Department of Posts, ED Agents be bracketed along with departmental employees. There is no need to set up a separate Committee or Commission for the Extra Departmental Agents”

“‘the matter is beyond controversy after the decision of Supreme Court of India in Gokulanda Das’s case where it has been declared that ‘an Extra Departmental Agent is not a casual worker but holds a post under the administrative control of the State and that while such a post is outside the regular civil service, there is no doubt that it is a post under the ‘State’. In view of this pronouncement we are unable to accept the contention that “extra departmental employees are outside the purview of the terms of reference of our Commission”

“The demand for inclusion in 7th CPC based on the definition of the expression ‘Central Govt. Employees adopted by 4th Central Pay Commission in para 1.11 of the report “as all persons in the Civil Services of the Central Government or holding Civil Posts under the Government and paid out of the consolidated fund of India” and its observations in para 1.17 & 1.18  - besides Apex Court’s judgement dated 22-04-1977 in the matter of Superintendent of Post Offices Vs. P.K.Rajamma regarding Gramin Dak Sevak services (earlier called Extra Departmental Agents) as holders of the civil post outside the regular civil service”….. 4th Central Pay Commission has categorically stated in para 1.10 that the expression ‘Central Govt Employees’ has not been defined in the Constitution or any other Law. It thus seems appropriate, if this term is duly defined based on which a final view over the inclusion of Gramin Dak Sevaks with in the purview of 7th CPC becomes possible”

“Request for inclusion in the 7th CPC stands referred to Ministry of Finance, Department of Expenditure vide Department of Posts ID No.17-13/2014-GDS dated 17-02-2014.”

“Mr. Destructor (i.e., Com. M. Krishnan, then Secretary General, NFPE), if you can’t do any good to employees, please do not mislead GDS employees”.

Now, recognized GDS Union General Secretary submitted memorandum to Communications Minister and Secretary, Department of Posts, demanding separate committee for GDS. Further he wrote to the Department not to allow NFPE & FNPO to take up the GDS cases with Department.

While continuing our organizational fight for emancipation of three lakh Gramin Dak Sevaks by conducting series of agitational programmes including Parliament March and indefinite strike NFPE & AIPEU GDS (NFPE) is conducting legal battle also for departmentalization of GDS. We have filed a Writ Petition [No. WP (C) 1003 of 2013] in the Supreme Court of India praying for Departmentalization and grant of Civil Servant Status for GDS as pronounced by the Supreme Court in the landmark judgement of Rajamma’s case in 1977.

POSTAL JOINT COUNCIL OF ACTION DECIDES TO GO FOR INDEFINITE STRIKE DURING THE THIRD WEEK OF FEBRUARY 2015. DATE OF STRIKE WILL BE DECLARED IN THE
2014 DECEMBER 4TH PARLIAMENT MARCH

Government and Postal board are totally negative and insensitive towards the demands of five lakhs Postal and RMS employees including Gramin Dak Sewaks and Casual, Part-Time Contingent employees.

Meeting of the Postal Joint Council of Action was held on 11.11.2014 at New Delhi. Shri D. Theagarajan, Secretary General, FNPO presided. Com. R. N. Parashar, Secretary General, NFPE presented agenda items for discussion. General Secretaries of affiliated Unions/Associations of NFPE & FNPO attended. Com. M. Krishnan, Ex-Secretary General of NFPE was also present in the meeting. PJCA reviewed the progress in settlement of 39 points charter of demands submitted to Secretary, Department of Posts on 28.08.2014. PJCA came to the unanimous conclusion that not even a single issue is settled by the Government and Department. Employees are suffering but authorities are turning a deaf year towards their genuine demands. Rome is burning but Neros are fiddling.

None of our demand is unjustified. Five lakhs Postal and RMS employees including Gramin Dak Sewaks and Casual, Part-time, contingent employees cannot remain as mute spectators. There is a limit for our patience. Government and Postal Board are treating our patience as our weakness.

Taking into consideration all the above aspects, the PJCA unanimously took the following decision.
1.      Entire five lakhs employees of the Department of Posts will go on indefinite strike from the third week of February 2015, if the demands are not settled before 31.12.2014.
2.      The date of the indefinite strike will be declared in the 4th December 2014 Parliament March.
3.      Every effort should be made by all All India/Circle/Divisional Unions to ensure maximum participation of employees in the Parliament March. Minimum 20000 employees should participate in the March. All should bring flags and banners.
4.      Laaders of INTUC, CITU, AITUC & JCM National Council staff side will be invited to address the Parliament March.
5.      Next PJCA meeting will be held on 03.12.2014 at 5 PM to decide the date of indefinite strike.

Let us march ahead with Determination and courage. This is time to show your sincerity towards the cause of five lakhs employees of the Department of Posts. Let us make the parliament March a Historic success. Let us unite together and make the indefinite strike a Thundering success. Let the Government and Postal Board understand that we are not Dumb-Driven cattle. We are workers and not beggars.

AWAKE! ARISE!! UNITE!!
Come in the Thousands to the Parliament March
Let us declare the indefinite strike in the presence of 20000 Postal Employees on 4th December 2014

You are requested to include the above mentioned item also in the charter of demands and “Action Taken Report” may be furnished on the above item also.

Meeting of the Postal Joint Council of Action held on 11.11.2014 reviewed the reply given by the Department to the Charter of demands submitted by PJCA on 28.08.2014 and also the progress made in settling the demands.

The PJCA meeting came to the unanimous conclusion that not even a single demand is settled and no positive approach in settling the demands is reflected in the action taken report. The PJCA is totally disappointed to read the reply. Discontentment among employees are growing day by day. Further it is noted that as many as 58 items submitted for discussion in the JCM (Departmental Council) was disallowed even without giving an opportunity to the staff side to explain the position on each case.

In view of the above position the Postal Joint Council of action unanimously decided to further intensify the agitational programmes. Accordingly the following decisions are taken.

1.      Entire five lakhs employees of the Department of Posts shall go on indefinite strike commencing from the third week of February 2015.

2.      Date of commencement of the indefinite strike will be declared in a massive Parliament March to be held on 4th December 2014. 20000 Postal and RMS employees including Gramin Dak Sewaks and Casual, Part-Time, Contingent employees will participate in the Parliament March, which will be addressed by the leaders of PJCA and leaders of Central Trade Unions and JCM National Council Staff side.

This is for your information and necessary action.

MORE LOYAL THAN THE KING!!!

“Recognized” GDS Union Leader Shri Mahadevaiah who cheated three lakhs Gramin Dak Sevaks by signing “Respectful” Agreement with Government agreeing for separate committee for GDS (Not 7th pay Commission) now want to stop the functioning of AIPEU-GDS (NFPE), AIPEU Group ‘C’ (CHQ) and NFPE (CHQ). He made false complaint to DG (Vigilance) against AIPEU-GDS (NFPE). (Please see letter published below) He asked under RTI to the Department whether the journal of NFPE “Postal Crusader” and “Bhartiya Post” of AIPEU Group ‘C’ (CHQ) are registered with Registrar of news papers (Proof will be published shortly). He want to show to the Government that he is “More Loyal Than the King”. But he should understand that he is throwing stone against the mountain. He cannot prevent the rising sun, the hope and inspiration of three lakhs Gramin Dak Sewaks-AIPEU-GDS (NFPE). 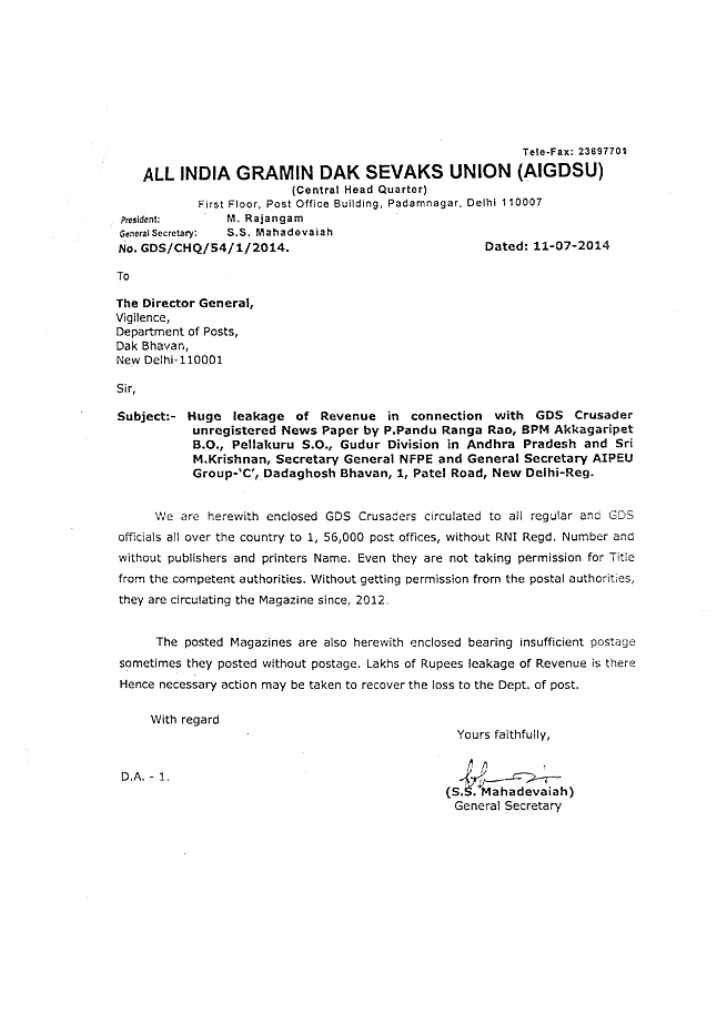