CONFEDERATION OF  CENTRAL GOVT.EMPLOYEES & WORKERS  SEMINAR HELD IN HYDERABAD ON 10TH JUNE DECIDED TO CONDUCT “ CHALO DELHI” ON 5TH SEPTEMBER AND ONE DAY STRIKE ON 15TH NOVEMBER BY ALL CENTRAL & ALL STATE GOVT. EMPLOYEES FOR SETTLE MENT OF OUR DEMANDS IN WHICH OUR MAIN DEANDS OF IMPLIMENTATION OF DOP ORDERS ON REVISION OF WAGES OF PTCL/FTCL FROM 1-1-2006 & AGAIN FROM 1-1-2016 AND CLEAR PAYMENT OF ARREARS IMMEDIATELY & REGULARISATION OF ALL PTCL/FTCL WITHOUT ANY CUT OFF DATE.

HECTIC CAMPAIGN WILL BE CONDUCTED TO ORGANISE & MOBALISE WORKERS IN ALL STATES BY HOLDING MEETINGS. ALL CIRCLE/ DIVISIONAL SECRETARIES ARE REQUESTED TO PARTICIPATE IN THE CAMPAIGN PROGRAMME ALSO WHICH WILL BE ANNOUNCED SOON.
AFTER THE MARCH ON 5TH, OUR CWC WILL BE HELD ON 6TH SEPTEMBER AT DELHI. WE ARE ARRANGING ACCOMODATION FOR 5TH & 6TH SEPTEMBER IN M.P.BHAVAN, OPPOSITE TO NFPE OFFICE IN NORTH AVENUE.

AS OUR UNION IS NOT HAVING SUFFICIENT FUNDS YOU ARE REQUESTED TO BEAR THE ACCOMODATION CHARGESWHICHARE NOT TOO HEAVY.
Posted by Y. Nagabhushanam at 23:02 No comments:

NOTICE
Dear comrades,
It is hereby notified that the central working committee meeting of our union will be held at BSNL BHAVAN,PATEL NAGAR, NEW DELHI on 6th September 2018 commencing sharp by 10-00 am, under the president ship of Com. M. KRISNAN,our president to discuss the fallowing agenda.
All CWC members & circle secretaries of all circles are requested to attend the meeting without fail.

AGENDA:-
1.TO REVIEW THE IMPLIMENTATION OF DIRECTORATE ORDERS IN R/0 REVISION OF WAGES & PAYMENT OF ARREARS IN ALL CIRCLES.

3.FINALISATION OF NEXT ALL INDIA CONFERENCE VENUE & DATES

4.ANY OTHER ITEM WITH THE PERMISSION OF CHAIR

COPY TO:
1. Com. M. KRISNAN, President with a request to attend the meeting and preside the CWC
2. ALL CWC MEMBERS& CIRCLE SECRETARIES
3. THE SECRETARY GENERAL, NFPE, NEW DELHI
4. ALL GENERAL SECRETARIES OF NFPE AFFLIATED UNIONS
5. THE SECRETARY, DEPT.OF POST, NEW DELHI
Posted by Y. Nagabhushanam at 10:14 No comments: 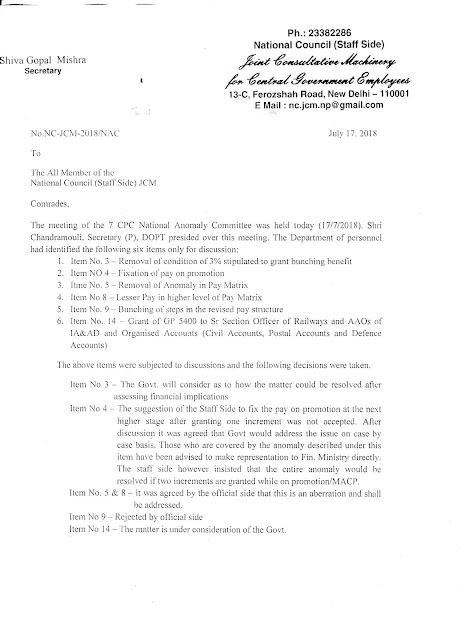 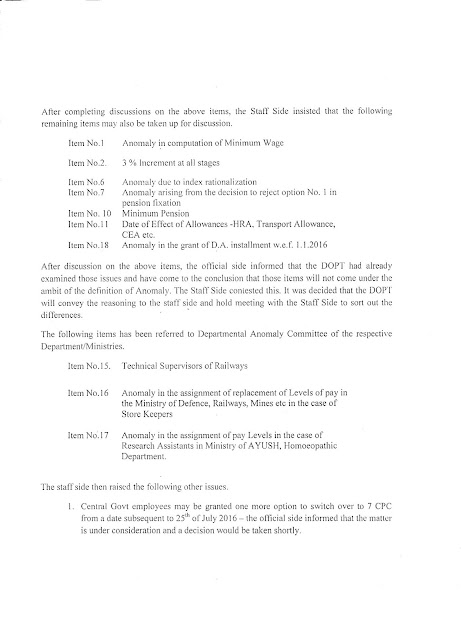 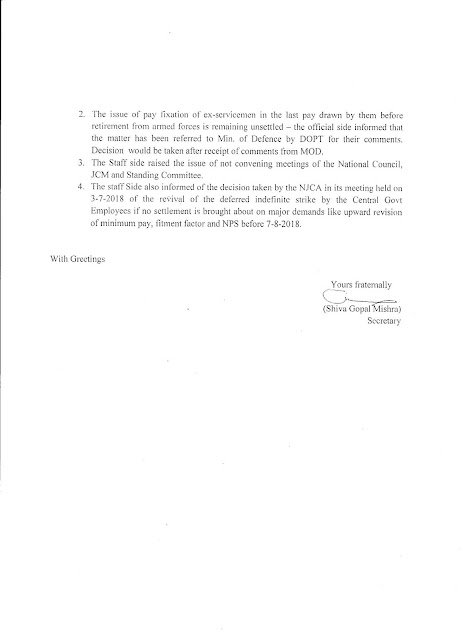 Posted by Y. Nagabhushanam at 09:40 No comments:

HOLIDAYS TO BE OBSERVED IN CENTRAL GOVERNMENT OFFICES DURING THE 2019-REG. (Click the link below to view)
https://dopt.gov.in/sites/default/files/holiday%20list%202019%202_1.pdf

Today, is the 58th anniversary of the Glorious Strike of the Central Government Employees which started on 11th July 1960 and continued for 5 days on the basic demands of the workers. That was their biggest strike in independent India till then, which shook the edifice of the Government.
It was suppressed by all repressive measures putting thousands in jail, dismissal, termination etc. But the workers never surrendered. The mighty one day Token Strike on 19th September 1968 reminded the Government that the workers can never be suppressed all the times.
On this day our Revolutionary salutes to all those comrades who sacrificed their lives at the altar of struggle and also who faced inhuman suppression and also the lakhs of workers who participated. Red Salute to all those who showed through their action that the united struggle is the right path. 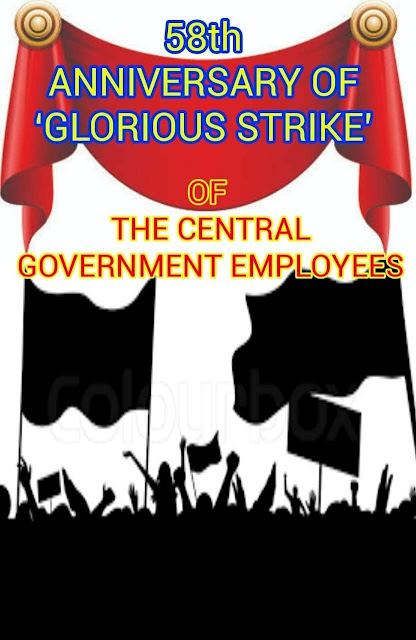 Appointment Order for B V Sudhakar retd. IPoS as an Administrative member in the CAT Hyderabad.

Email ThisBlogThis!Share to TwitterShare to FacebookShare to Pinterest
DECISION OF THE NJCA MEETING HELD AT JCM (NC) STAFF SIDE OFFICE, NEW DELHI ON 3rd JULY 2018
Representatives of the Confederation took a stand that as two years are already over after the assurances given by Group of Ministers, NJCA should revive the deferred indefinite strike immediately and date of commencement of the strike should be decided. After detailed discussion and after considering the views expressed by other NJCA Members (representing Railway Federations & Defence Employees Federations), it was unanimously decided TO PASS A RESOLUTION against the anti - employee attitude of the Government and inform the Government that if the Government fails to settle the demands of the Central Govt. Employees raised by NJCA including the major demands viz; increase in Minimum Pay and Fitment Factor from 01.01.2016, Scrapping of NPS, implementation of Option - 1 from 01.01.2016 , withdrawal of "very good" bench mark for promotion , through a negotiated settlement on or before 07th August 2018 , then the NJCA would be left with no option than to revive the deferred indefinite strike action. The NJCA will meet on 18th August 2018, to decide next course of action.
NO CHANGE IN CONFEDERATION's ONE DAY STRIKE ON 15th NOVEMBER 2018

Keeping in mind our experience with NJCA, Conferation National Secretariat has decided to go ahead with the 15.11.2018 strike and Campaign programmes as decided in the 10th June Hyderabad National Convention demanding settlement of 10 points Charter of demands of Confederation.

Posted by Y. Nagabhushanam at 11:39 No comments: