by Dinesh Narayanan
The government’s postal arm is unmatched in terms of reach and management of deposits
O
f the 26 aspirants who want to set up a bank, the government arm, India Post, appears to be best placed to fulfil the objective of financial inclusion. The Reserve Bank of India has said new banks will have to set up at least three branches in villages with a population of less than 10,000 for each branch they establish in other areas.

Unlike what many believe, a Post Bank of India (PBI) will be a completely new entity with no legacies of a government department and very little to do with its parent, except using some of its network. It will have an independent board and just two members from the government, one from the finance ministry and another from the department of post.

Geographically, the India Post network beats the entire banking system in the country. The ubiquitous mail carrier is present in more than 1,55,000 locations in India, 90 percent of them in villages. On an average, a post office serves an area of a little over 21 sq km and a population of 7,175, much lower than the RBI norm. In terms of experience with collecting deposits, the crucial left hand side of a bank balance sheet, again the department is unmatched. It manages over Rs 6 lakh crore in savings deposits and offers several financial services such as pensions schemes, insurance, recurring deposits and remittances.

That said, one of the crucial areas in which the department is short in experience is credit; the bread and butter for a bank.

To be sure, the idea of a PBI has been around for nearly 15 years as leaps in modern communications technology gradually made the snail mail unattractive and obsolete. On July 14, India Post shut down its 162-year-old telegraph service.

About five to six years ago, the Administrative Staff College of India prepared a report on turning the post office into a bank. It was more wishful thinking than a concrete business plan. It had proposed turning all post offices into bank branches. “That would have required about Rs 62,000 crore in capital and Rs 2 lakh crore in priority sector lending,” says Ashvin Parekh, Partner and National Industry Leader, Global Financial Services, Ernst & Young. RBI norms require all new banks to comply with reserve requirements from start.

The RBI and the finance ministry had also raised concerns about the department’s credit capability. It was clear that turning the entire network into a bank was a non-starter.

According to the plan prepared by Ernst & Young, India Post will become PBI’s banking correspondent. PBI, which will start with just 40 branches, will use the post office infrastructure but very frugally. In the beginning, it is only looking at a small, Rs 5,000 crore bank. That also means the government will not have to shell out huge amounts of capital. Anyway, the bank will need to bring in new shareholders and sell equity to the public for a stock market listing, as per RBI norms.

The bank can also leverage the technology backbone that is being put in place. The department has a Rs 4500 crore allocation in the 12th Plan for technology upgradation. Of that budget, Rs 1,200 crore will go only into financial services, including a core banking software, Infosys’ Finacle.

Carefully done, the PBI can be a game-changer in rural areas. It has a great brand recall and in many villages of India, the postman is a popular person. In fact, it can go one step ahead and even play a role in financial literacy in villages.
Posted by Y. Nagabhushanam at 21:41 No comments:


THE MESSAGE IS LOUD AND CLEAR
AWAKE, ARISE, UNITE

The 9th Federal Council of NFPE held at Hyderabad from 9th to 13th June 2013, gave a clarion call to the five lakhs Postal and RMS employees including Gramin Dak Sevaks (GDS) to be ready for an indefinite strike, in case our demand for setting up of seventh Central Pay Commission (CPC) and merger of DA with pay is rejected by the Central Government. The conference in one voice also demanded the Government to withdraw the Contributory Pension Scheme and scrap the Pension Fund Regulatory and Development Authority (PFRDA) Bill. It further decided that even if Pay Commission is appointed, if the Government refuse to include the revision of wages and service conditions of GDS in the term of reference of the CPC and grant the DA merger benefit to GDS, entire employees shall go on indefinite strike.

Finally, as in the past, as a logical corollary, the Railway and Defence employees Federations have also decided to go for an indefinite strike raising the 7th CPC and DA merger demand. Due to conscious and persistent effort made by Confederation, especially its versatile and undisputed leader Com. S. K. Vyas Ji, a joint meeting of AIRF, AIDEF and Confederation was arranged on 29th July 2013 and Joint Council of Action (JCA) is formed, the JCA decided to organize various campaign programmes, culminating in indefinite strike. As a first step it is decided to submit a letter to the Government listing out the demands and also its time-bound settlement. The seven point charter of demands includes setting up of 7th CPC, DA merger, compassionate appointment, regularization of GDS and Casual Labourers, Scrapping of PFRDA Bill, removal of bonus emolument ceiling, functioning of JCM and implementation of arbitration awards. Even though in the past, the dominant leadership of the National Council JCM has taken a stand that as GDS do not come under JCM, their demand cannot be included, this time the Confederation and NFPE leadership could convince them and they agreed for inclusion of GDS demands also.

Thus a situation has emerged wherein the entire Central Government employees stands united and determined to realize just and genuine demands. The message is loud and clear. Now it is the duty and responsibility of each and every one of us to carry the message to the grass-root level workers and build up broadest unity among the rank and file. Once such a rock-like unity for struggle is achieved, no Government can reject our justified demands. Time is short. Let us awake, arise and unite.
Posted by Y. Nagabhushanam at 10:40 No comments:

DEPARTMENT CIRCULATED THE LIST OF OFFICE BEARERS OF NFPE 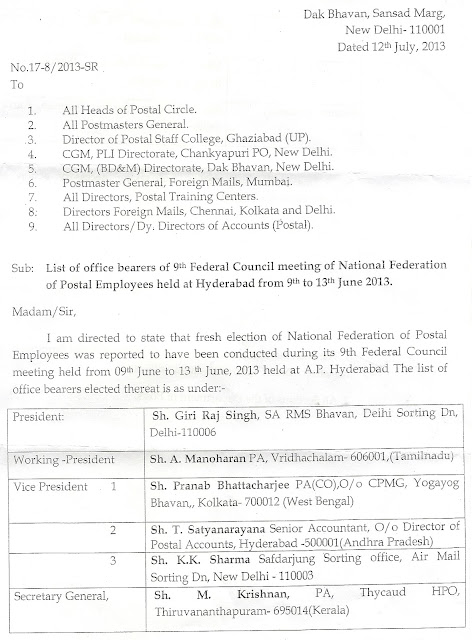 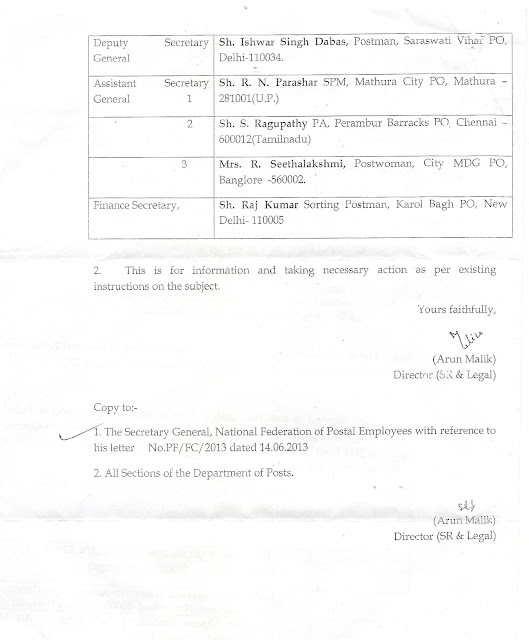 Posted by Y. Nagabhushanam at 10:47 No comments:

The first meeting of the National Secretariat of the Confederation was held at New Delhi on 22.07.2013. Com. K. K. N. Kutty, National President, presided. The following office bearers were present:

The following office bearers applied for leave/expressed their inability to attend:

The following office bearers could not reach due to train late/cancellation:

The following comrades were absent:

Com. S. K. Vyas, Advisor, in his opening remarks, explained the background of events which led to the formation of a Joint Council of Action of Railway (AIRF) Defence (AIDEF) and Confederation and also pointed out its weaknesses and limitations. He stressed the need to further strengthen the unity. He opined that on the 15 point charter of demands, Confederation must conduct its own independent campaign and agitational programmes. If the Railway and defence Federations come forward for serious agitational programmes including indefinite strike we must join such campaign and strike action.

Com. M. Krishnan, Secretary General made a brief presentation of the Conference proceedings, which was approved by the house after discussion.

The meeting decided to organize independent campaign and agitational programmes culminating in indefinite strike. The specific decisions were:
(i) To organize state level joint strike conventions of C-o-C with the participation of all affiliated unions/Associations/Federations during the month of August 2013. Whereever the C-O-C functioning is not satisfactory or has no participation of district units, efforts must be taken to revamp the committee.
(ii)  To organize mass Relay dharna at different places in all important stations during the first week of September 2013 (from 02.09.2013 to 07.09.2013).
(iii)To conduct nationwide strike ballot during the last week of September 2013 (On 25, 26 and 27th September) Model of the ballot will be sent later.
(iv)To convene the Central Working Committee/Central Executive committee meetings of all affiliated unions/Associations/Federations before the 1st week of October 2013. All India Office Bearers of the Confederation may be invited to attend the meeting.

3.      Joint programme of AIRF, AIDEF and Confederation:
It was decided to make all out effort to further strengthen the Joint council of action (JCA) and also to launch serious agitational programmes culminating in indefinite strike before December 2013.

4.      Formation of State Committees and District Committees
It was decided to reorganize the COCs which are defunct or not functioning satisfactorily. This is to be done when the state level strike campaign conventions are organized. Participation of representatives of all affiliates should be ensured in the conventions.

6.      Organising Trade Union Education Camp:
It was decided to hold the Trade Union Education Camp at Mumbai in November/December 2013. Number of participants shall be 150 (maximum). Delegate fee Rs. 600/- per delegate Postal, ITEF, Audit & Accounts and Atomic Energy delegates accommodation shall be arranged by their respective Federations. C-O-C Mumbai shall function as the Reception committee. Date and Venue will be intimated later.

8.      Financial Review:
Financial Secretary shall present the actual picture in the next meeting. Meanwhile letters should be sent to all affiliated unions to remit the arrears of quota immediately.

10.  Affiliation to new organizations:
The application for affiliation received from the following two organisations was considered and it is decided to grant affiliation subject to their accepting the terms & conditions for affiliation.
(i)     Indian School of Mines Karmachari Sangh, Dhanbad.
(ii)   Song and Drama Division Employees Associations, New Delhi

11.  National Convention of Central Trade Unions on 6th August 2013.
The available National Secretariat members/leaders at Delhi will attend the convention on 6th.

All office Bearers, State Committees, other C-O-Cs and Affiliated Unions/ Associations/ Federations are requested to implement the above mentioned decisions of the National Secretariat meeting, WITHOUT FAIL.

This may be treated as most urgent/important,

Posted by Y. Nagabhushanam at 10:55 No comments:

F.No.A- 12018/5/2013-Ad.ll-B
Government of India
Ministry of Finance
Department of Revenue
Central Board of Excise and Customs
New Delhi, the 18th July, 2013
To
The Chief Commissioners
(Customs tuid Central Excise)
Sub: Validity of Recruitment Rules.
Sir,
I am directed to say that during the Annual Conference of chief Commissioners. (Customs and Central Excise) held on 17th July, 2013, some of the Chief Commissioners have raised a doubt whether they can
make recruitment pending amendment in Recruitment Rules.
2. Department of Personnel and Training vide O.M. No.AB. 14017/79/2006-Estt. (RR) dated 06th September, 2007 has clarified that Recruitment Rules are statutory and they will not cease to operate unless
they are repealed or replaced. Hence, there is no bar for making recruitment on the basis of existing Recruitment Rules.
Yours faithfully,
sd/-
(A.K. Qasim)
Deputy Secretary to the Govt of India

Posted by Y. Nagabhushanam at 10:33 No comments: