Sub: -  Inclusion of Gramin Dak Sevaks of Department of Posts under the purview of the proposed Seventh Pay Commission – regarding.

With due respect and regards, we put forth the following for your kind consideration and favourable decision please.

In the Department of Posts, the 50% of the total work force are called as Gramin Dak Sevaks and they are continuously being discriminated by separate committees formed for the consideration of their wages and service conditions.

The Supreme Court of India declared that these Gramin Dak Sevaks are holder of civil posts and it is a well settled law. Despite the judgment, the same civil servant status has not been accorded yet to them except a part in case of disciplinary proceedings.

The Fourth Central Pay Commission categorically emphasized that, the GDS issues shall be brought under the purview of Pay Commissions. But still separate committees are constituted.

The last committee constituted at the time of Sixth Central Pay Commission caused clear injustice to these employees and they are deprived all the service benefits at par with civil servants even though the law of the land declared and settled them as the holder of the civil posts.

Under these circumstances, we most humbly request the Hon’ble Prime Minister of India to consider our request and cause orders to include the GDS of the Department of Posts under the terms of reference of the Seventh Central Pay Commission.

RATES FOR DEARNESS ALLOWANCE APPLICABLE W.E.F 1.7.2013 TO THE EMPLOYEES OF CENTRAL GOVERNMENT –PAYMENT THEREOF REGARDING (ORDERS FROM DEPARTMENT OF POSTS) 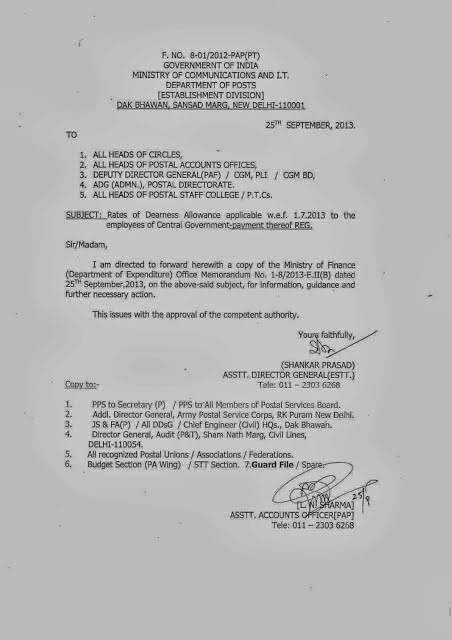 Links to this post
INDIA POST PUSHES AHEAD WITH BANKING PLAN DESPITE OPPOSITION (CLICK LINK BELOW FOR DETAILS )  http://www.livemint.com/Industry/VtuKVTtxNypBzhFhA2lhiO/India-Post-pushes-ahead-with-banking-plan-despite-opposition.html
Posted by NFPE at 11:12 am No comments:

DOP ORDER REGARDING DEARNESS RELIEF TO PENSIONERS WITHOUT WAITING 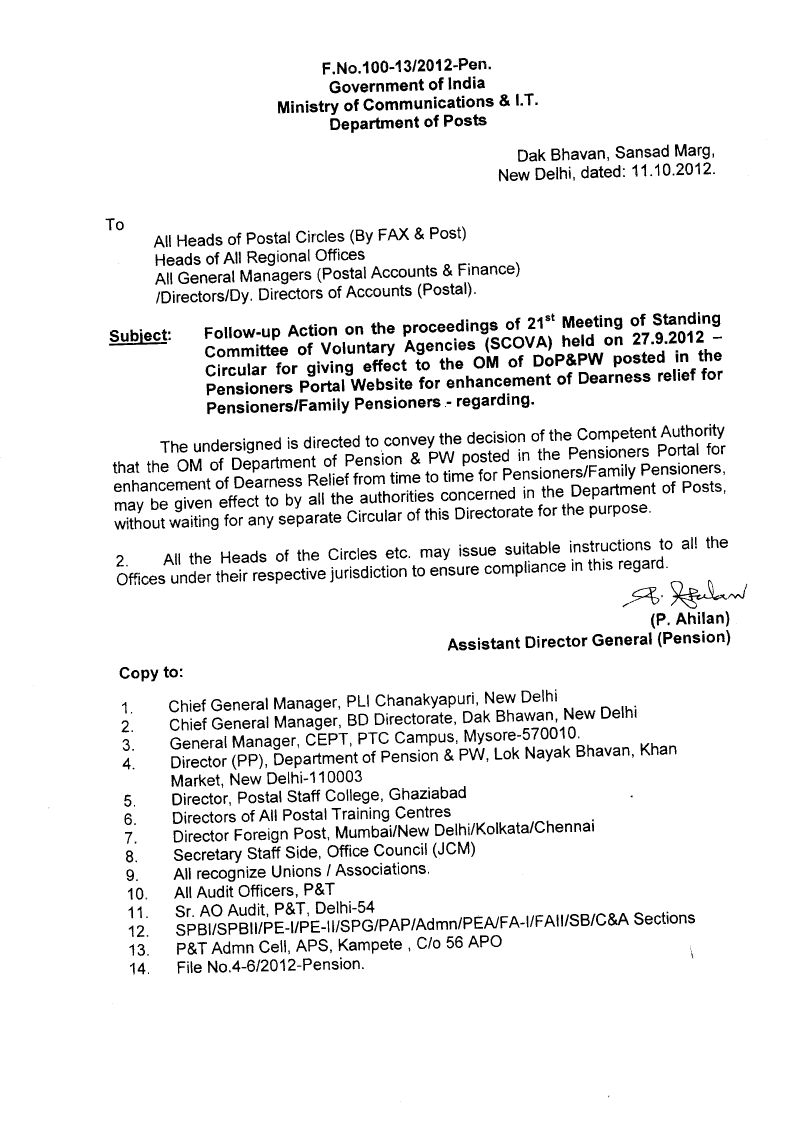 As you are aware, the World Federation of Trade Union was founded in an international conference of Trade Unions held at Paris from 3rd October, to 8th October, 1945.  At the 16th Conference of WFTU held at Athens, Greece in April, 2011, it was decided to observe 3rd October, every year (the foundation day of WFTU) as International day of Action.  In 2012, we observed the day raising the demand for food, water, health, education and housing for all.

Food: 850 million people in the world are undernourished.  India is on the tgop of nations with largest member of cases of malnutrition.

Water: Privatisation of water, has caused havoc as it has become one of the most profitable enterprise.  The people’s right to water(without which life cannot exist) is trampled upon in many countries in favour of Corporate profits.

Education: Education has become a commercial activity after the advent of neo liberal economic policies.  The campaign for free education for all must be made intensive.

Health: Health is an extremely lucrative business.  Govt. of India over the years since 1991 has withdrawn itself from this sector making private enterprises to thrive increasing the agony of the people.

Housing: A large number of our population has no dwelling place today.  There is no governmental initiative in the matter in most of the countries.  The poor people all over the world are left high and dry.

WFTU has now called upon the workers of the world to reiterate these demands, observe 3rd October, as International day of Action by holding rallies, demonstration etc.  All employees may be requested to wear the badge depicting the five demands mentioned above on 3.10,2013. A specimen of the badge is appended hereunder.

SPECIMEN BADGE
FIGHT FOR YOUR RIGHTS
FOOD, WATER, MEDICINES,
EDUCATION AND HOUSING
TO ALL FOR DECENT LIFE

WEBSITE OF ALL INDIA POSTAL & RMS PENSIONERS INAUGURATED BY SG NFPE
The All India Steering Committee to form the All India Postal & RMS Pensioners Association with Comrade D.K.Rahate Ex-President NFPE as Chairman; Comrade T.Narasimhan Vice President Confederation as Vice Chairman; and Comrade K.Ragavendran Ex-Secretary General NFPE as the General Convenor has just opened a BlogSpot website of its own with the  URL"www.postalpensioners.blogspot.in ".
I am very glad to declare the website inaugurated.
I am sure that the website of the Postal & RMS Pensioners Association will be a powerful electronic organ for carrying the news about pensioners' issues as well as to work as a unifying force to bring together all Postal Department Pensioners under its united banner.
Comradely yours
M.Krishnan
Secretary General

Secretary, Department of Posts invited Secretary General NFPE for attending a function of Hon'ble Minister of Communications & IT on 28-09-2013 regarding enhancement of GDS bonus ceiling. 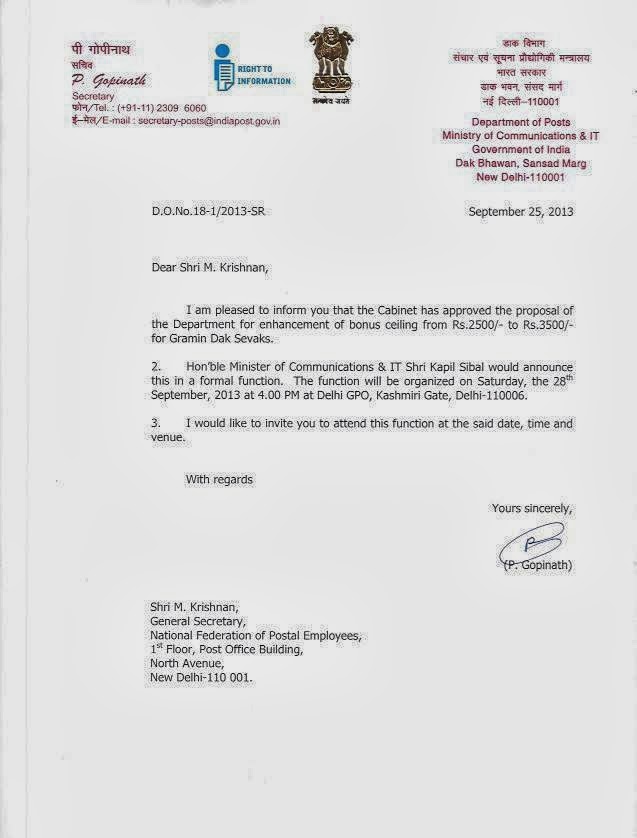 Central Government has announced the constitution of 7th Central Pay Commission. Confederation of Central Government Employees & Workers has been raising this demand before the Government right from 2011 onwards and has conducted series of agitational programmes including Parliament March and one day nationwide strike on 12th December 2012.

In view of the above, the National Secretariat of the Confederation of Central Government Employees and workers urge upon the Government to consider the above demands also favourably failing which the confederation shall be constrained go for further agitational programmes.

Secretary General
Posted by Y. Nagabhushanam at 04:04 No comments:

PAYMENT OF DEARNESS ALLOWANCE TO CENTRAL GOVERNMENT EMPLOYEES - REVISED RATES EFFECTIVE FROM 01.07.2013 (CLICK THE LINK BELOW FOR DETAILS)
http://www.finmin.nic.in/the_ministry/dept_expenditure/notification/da/da01072013.pdf 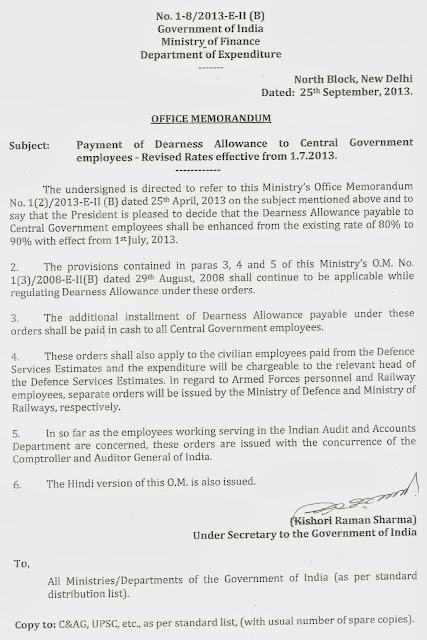 ORDERS WILL BE ISSUED SOON= M. Krishnan SG NFPE
Posted by NFPE at 10:48 am No comments:

GDS bonus ceiling raised from Rs.2500 to Rs.3500 from this year itself

Posted by Y. Nagabhushanam at 01:41 No comments:

Central Government today announced the constitution of the 7th CPC. Confederation of Central Government Employees and workers alongwith NFPE has been demanding appointment of 7th CPC right from 2011 onwards. We have conducted continuous agitational programmes including Parliament March and also one day nationwide strike on 12thDecember 2012. After 12th December Strike we have decided to go for indefinite strike and strike ballot is also announced. We congratulate the entire Central Government employees who rallied behind Confederation. Confederation is the only organization which has conducted serious agitation demanding constitution of 7th CPC.

Government has not yet announced the Chairman, Committee members etc of the 7th CPC and also terms of reference. Further our demand for merger of DA, giving effect from 01.01.2011, inclusion of three lakhs Gramin Dak Sevaks under the purview of 7th CPC, granting DA merger to GDS and settlement of other demands in the 15 points Charter of Demands are also pending. Before announcing the terms of reference of 7th CPC. If Government is not ready to accept our above demands, Confederation National Executive will meet shortly and shall decide for further course of action.

ANNOUNCEMENT OF 7TH CPC IS ONE STEP FORWARD AND IT IS THE VICTORY OF THE WORKERS WHO FOUGHT FOR IT.
Posted by Y. Nagabhushanam at 01:35 No comments:

Posted by Y. Nagabhushanam at 09:59 No comments: