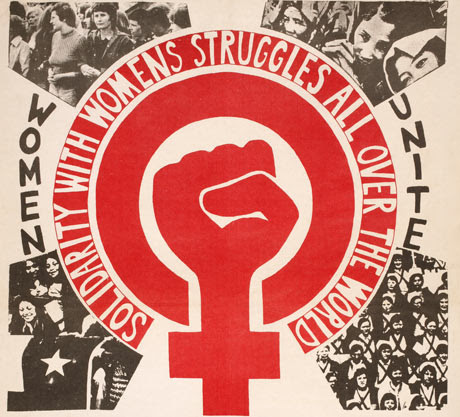 Marking International Womens Day 1975, the feminist magazine Spare Rib reported: '4,000 women marched through London's East End.' Photograph: Red Women's Workshop
Today is the International Women's Day. First agreed at a socialist women's conference in Copenhagen in 1910, its aim was to campaign for the rights of working women. Today, the lives of women have changed beyond recognition compared with those of their grandmothers and great grandmothers. But the changes in work and personal life have been distorted by the needs of the market and have fallen far short of women's liberation.
The experience of work has been challenging and invigorating for a few, but for most women in the shops, offices, call centres and factories of 21st-century Britain it has been more likely to represent long hours, constant pressure, and growing attempts to squeeze more productivity and profit out of them. The big increase in the numbers of women working (more than 12 million today) has come from working mothers. But there has been no similar change in how the family and childcare have been organised.
So while mothers work outside the home, often full-time, they are also often expected to shoulder the needs of shopping, feeding and caring for their children. This is on top of sometimes long journeys to work, and of the demands of shift work for many. Whereas the old sexist dichotomy of the 50s was that women could either have looks or brains, now we are expected to have both, plus cooking skills at least to the level of Come Dine With Me, and an all-seeing eye to ensure that children behave at all times.
Women are expected to juggle all aspects of their lives and are blamed as individuals for any failing in their work or family life. The only people who can begin to succeed in doing this are those who can afford to pay others (usually women) to carry out some or all of these tasks. So an army of working-class women cook, clean, care for children, do ironing and washing, work in supermarkets, wait in restaurants, perform personal services, all to ensure the easier life of those women who "have it all". Often in the process they neglect their own families to do so.
The way in which women's working lives are portrayed reflects this. There is much talk of glass ceilings, but little about those women who are falling into the basement, struggling to work and maintain families on poverty wages. The life experiences of women (and men) are radically different, with a small minority sharing in the profits made by working-class men and women.
Alongside work has come increased sexualisation of society – now greeted with horror by respectable middle-class opinion, but much encouraged by advertising, the media and the profit motive itself, where porn and lap dancing are now big business. The other side of this sexualisation is the continuing high levels of rape, domestic violence and sexual abuse. We are still a very long way from women controlling their own lives and sexuality.
This International Women's Day we should recommit to a women's liberation which is connected to a wider movement for human emancipation and for working people to control the wealth they produce. That's why women and men have to fight for liberation. We won't win without a fight, because there are many vested interests who want to stop us. But more and more people are beginning to connect campaigning over climate change, war and inequality with fighting for women's liberation. That's why we are launching a manifesto for 21st-century feminism to begin to organize for real equality.
Posted by Y. Nagabhushanam at 11:44