The BJP- led NDA Government has intensified it's policy attack on Railways and Defence establishments and employees.

After the Narendra Modi Government coming to power 100% Foreign Direct Investment (FDI) is allowed in Railways. A committee headed by Sri Bibek Deb Roy , Member , NITI Ayog  (National Institute for Transformation of India Ayog) was appointed for restructuring of Railways. The committee recommended complete privatisation of Railways. AIRF in its resolution adopted in the 92nd Annual Conference held at Allahabad from 8th to 10th December 2016, stated as follows:

"NDA Government assumed power on 26th May 2014. The General Body meeting of AIRF held on 3rd and 4th July 2016 at Chennai, decided to defer the strike decision to provide time to the new Government to settle and resolve grievances. But the same Government by a notification dated 22nd August 2014, decided to induct 100% FDI in Indian Railways, Defence establishments etc.  The Government appointed a high level Railway Restructuring Committee, on 22nd September 2014, headed by Sri Bibek Deb Roy, for restructuring Railways. The same committee had drawn a road map for privatisation and went ahead gradually, despite all out protest by AIRF. "

The merger of the Railway Budget with the General Budget was one of the key recommendations on Bibek Deb Roy committee, as an important step towards privatisation of Railways. Government has implemented the decision from this year onwards, on top priority basis. It is also reported in the media that Government has decided to privatise heritage and tourist Railways like Kalka - Shimla, Siliguri - Darjeeling and Nilgiri (Ootty) railways. BIBEK DEB ROY COMMITTEE RECOMMENDATIONS ARE THE BEGIN ING OF THE END OF THE GOVT OWNED INDIAN RAILWAYS.

To add insult to injury, the Railway Board has issued orders curtailing the basic trade union rights of Railway employees. AIRF circular issued on 2nd February 2017 reads as follows:
"In continuation of our earlier letter of even no. dated 1st February 2017, you are advised to observe "Black Day" on 6th February 2017 wearing black badges/ribbons, right from branch to zonal levels, at all important offices of your Railway administrations, DEMANDING WITHDRAWAL OF RAILWAY BOARD'S LETTER DATED 31.01.2017, WHEREIN THE BOARD HAVE DECIDED TO DEBAR SUPERVISORS (IN ERSTWHILE GRADE PAY OF 4200) WORKING IN SAFETY CATEGORIES FROM TRADE UNION".

AIRF statement also said that the order is in violation of 87th ILO Convention and Indian Trade Union Act.

Railway order says that those supervisors working in safety categories cannot become office bearers of unions/Associations/Federations, but can only remain as members with effect from 01.04.2017.

The above is the present situation in Indian Railways and all the Railway unions/Associations/Federations are conducting various protest programmes (other than strike as dominant organisations are yet to take such a decision) against the policy offensives of the NDA Govt. Recently on 1st &  2nd February 2017, Dakshin Railway Employees Union (DREU) , All India Loco Running Staff Association (AILRSA), All India Station Masters Association (AISMA) , All India Guard Council , Indian Railway Technical Supervisors Association etc. (other than AIRF and NFIR) had organised a massive National Convention and also Parliament March at New Delhi , demanding no privatisation and modifications in the 7th CPC recommendations.

ATTACK ON DEFENCE SECTOR
The situation in Defence sector is also not different. All India Defence Employees Federation (AIDEF) in its circular dated 04.02.2017, has conveyed the following developments to its rank and file:

In a meeting of Senior Officers held on 5th January 2017, the Secretary, Ministry of Defence made the following comments –
"You have to reduce the cost, otherwise you will not get workload in future, you have to compete with the private sector for getting workload. Two years is the period for ordnance factories."

Recently Sri Manohar Parikar, Defence Minister , who visited AFK Pune , in the meeting held with unions has stated that ---" Factories which are manufacturing clothing and leather items are not required in the Government. These items can easily be procured from private sector."

The proposal of corporatisation (which is a step towards privatisation)   is also under consideration with Prime Minister's Office (PMO). Govt has constituted another committee to identify low technology/noncore items. It is seen from the press reports that a committee constituted by Defence Minister under the chairmanship of one retired IIM Professor has recommended for creation of a new independent organisation outside the Ministry of Defence to undertake defence procurement. It is understood that a new organisation tentatively called the"DEFENCE ACQUISITION AUTHORITY" will be fully responsible for the entire process of acquisition.

All these policy decisions of the Government will have serious impact on the existence of ordnance factories and on the job security of defence civilian employees. AIDEF has decided to convene a meeting of ordnance factory unions to take a serious stock of the situation and formulate an action plan to fight back.

THIS GOVT WILL UNDERSTAND THE LANGUAGE OF STRIKE ONLY. CONFEDERATION IS ON THE RIGHT PATH.
Confederation of Central Government Employees & Workers, representing about thirteen lakhs Central Government Employees, which always stood in the forefront of the struggle against neo-liberal reforms and anti-people, anti -worker policies of the Govt. and also which conducted series of agitational programmes including strikes against the policy offensives of the Government, extends full support and solidarity to the Railway and Defence employees in their struggle for existence.

Confederation calls upon the entire Central Govt. employees to make the 16th March 2017 one day strike a thundering success. Let us be ready for an indefinite strike, if situation warrants.

The topic for International Women's Day this year has been decided as "Women's Employment and Empowerment."

The country is witnessing one of its lowest work participation rate of women. With the continuing agrarian crisis and now the reverse migration due to industrial slow down after demonitisation , even those women who were earlier employed are forced to go for poorly paid work for subsistence. The demand for decent work and decent wages are at the centre of our demands. The "empowerment " of women in all aspects is related to the "employment" of women and it's quality. The policy pursued by the present day regime can create only unemployment and distress.

National Secretariat of the Confederation of Central Government Employees and Workers Calls upon all affiliated organisations and C-O-Cs and Women's Sub Committees to take proper organisational measures to ensure effective observance of the International Women's Day jointly with other fraternal organisations. 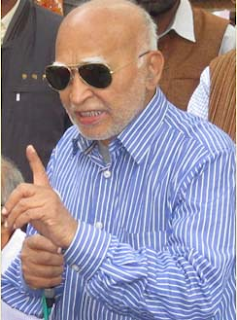 NPS committee constituted by the Government to streamline the National Pension System has called the JCM Staff Side for second round of discussion on 10.02.2017. As per the notified agenda, the committee is proposing discussion on only cosmetic changes in NPS. Basic issues such as (1) scrapping of NPS (2) Guaranteed Minimum pension to NPS Pensioners  ie; 50% of the last pay drawn should be guaranteed by Government as minimum pension even if the returns from annuity insurance scheme amount is less than the 50%. and (3) Exemption of Central Govt. Employees from the purview of NPS, are not included in the agenda of the meeting even though the Cabinet Secretary has assured JCM Staff Side Chairman and Secretary Shri. Raghavayya and Shri Shiv Gopal Misra on 19th January 2017 that -- "so far as issue of NPS is concerned he has already directed the Committee to hold meeting with Staff Side". From reading the agenda it can be seen that main demands of the Staff Side are avoided, thus betraying the cause of thousands of younger generation Central Government Employees who joined service after 01.01.2004. Their hopes are shattered and belied. NJCA should revive the deferred strike to protect the interest of younger generations. Let us make the 16th March 2017 Confederation Strike a grand success. 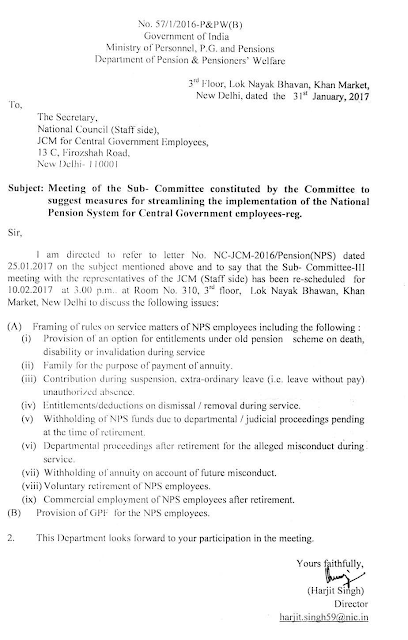